The rate at which technology progresses is always going to be a discussion for the leaders of a company. How the decisions are handled will have a lot to do with where the company fits in on the technology adoption curve. We’ll look at how it works, where you lie in the curve, and where you can use the basic principles to gain a competitive advantage.

The technology adoption lifecycle refers to how different kinds of people use technology and when. There are different adopter categories, which will tell you both who the primary market is and ballpark approximately when they’re likely to either buy or be exposed to any given product. When you know what category you fall into, you’ll have a better idea of how your attitude and habits will influence what decisions you make for the company.

Emerging technology is always going to have an initial reception, but it’s not always clear what that technology will become in 5, 10, or 15 years. Some products are instantly popular and stay that way. For instance, a smartphone may come out with new iterations, but it was and still remains a sought-after product. Some technology debuts to great fanfare and then loses steam quickly after. Other devices or programs are ignored entirely for years until they suddenly explode on the market — seemingly out of nowhere.  Some start off as forgettable and are never heard from again.

Innovation adoption can be thwarted by anything from timing to the state of the economy. However, there are often subtler forces at work, ones that go unnoticed until they’re impossible to ignore. If you find that you only hear about a product after everyone else has, it might be time to explore why this is and what you can do to ensure you stay ahead of the game.

The innovation adoption curve was first introduced by management consultant Geoffrey Moore, who built upon the Diffusion of Innovations theories by sociologist and communications theorist E.M. Rogers. Moore’s model shows how high-tech products move through the markets, and why their ultimate success is dependent on how five key groups react to the innovation.

Innovation adoption has a lot to do with the overall success of a business. For instance, let’s say that you ran an insurance company that was still using dial-up when 90% of your peers had already switched over to Wi-Fi.

The technology adoption curve in this case is always going to be a tricky track to follow though because it’s not always rooted entirely in the quality of the product. This can throw people off and cause them to miss out on trends in the early stages.

For instance, let’s say that a company comes out with a flashy new laptop hybrid. It’s not very functional, but it looks great and the innovators love to carry it with them and show it off to anyone who will listen. The early adopters take to it quickly and their support then sees the early majority driving the adoption curve. That initial financial boost at the beginning leads to the company designing a much more functional version not more than a few months after the first release. The next thing you know, it’s a must-have product that’s both sleek and useful.

This is a clear example of a new innovation that started out without very much to offer and still manages to become extremely popular for all the right reasons. Whether you’re a CEO or CTO, you need to be aware of what innovators are doing and whether it makes sense to pursue the same course of action. 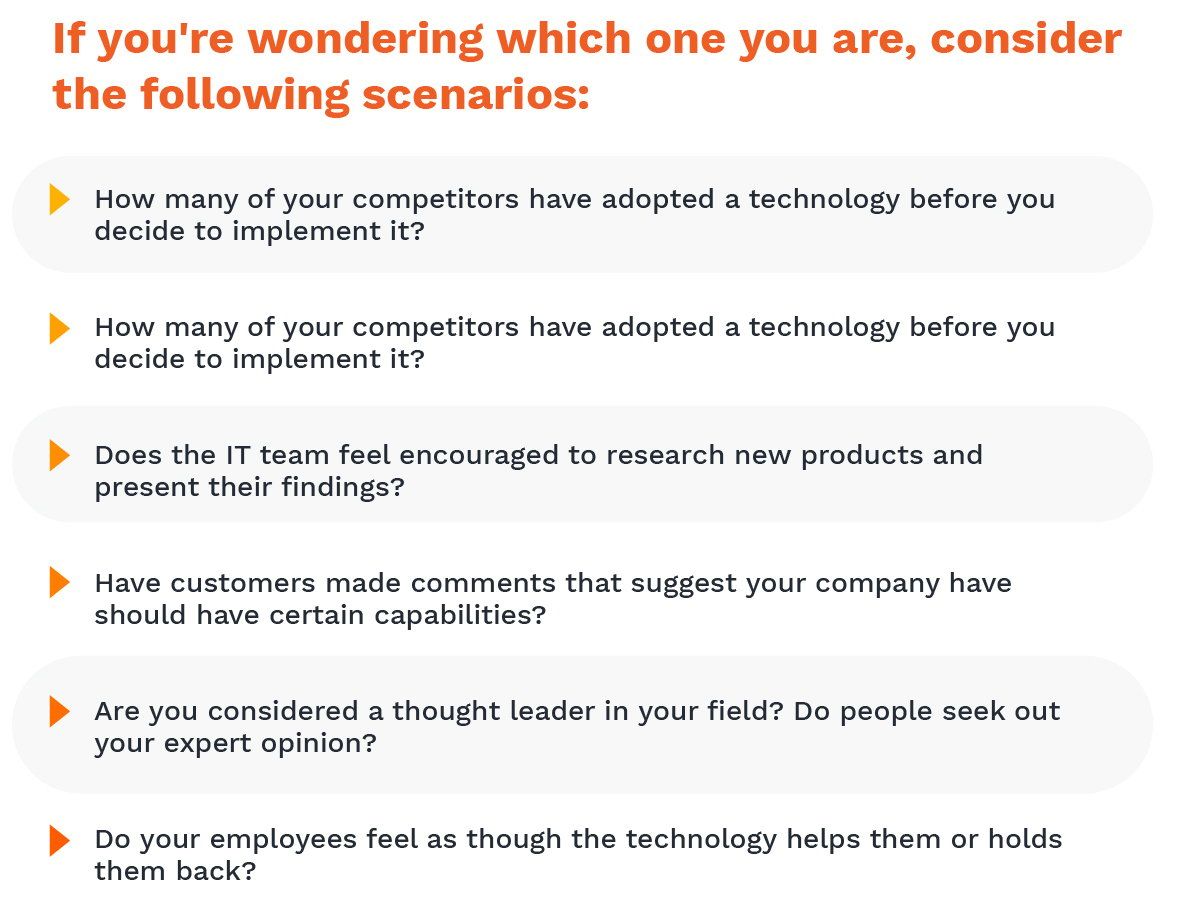 A laggard company will still be using a Rolodex when everyone else is using a CRM. An early majority company might buy iPhone 3s instead of the original version, while a late majority company might wait until the iPhone 5 or 6. If you know that your company is only likely to consider technology after it gains serious traction, it might be time to consider the benefits of moving up into the top echelons of the life cycle.

Crossing the Chasm in the Technology Adoption Life Cycle

The chasm is defined as the time between when innovators and early adopters have discovered and used a product, but the early majority have not. This is the widest gap to cross, and one that has taken down promising companies and ideas before they had the chance to get off the ground.

For a pragmatist leader, this is a precarious time. There’s no reason to compromise your budget for a technology that’s too complicated to use or defunct after a few months. There’s no historical data to compare it to either. If you’re trying to get a grip on what a product can do for you, there will be very few real-world case studies to draw from.

But an early adopter doesn’t share the same decision-making process precisely because they’re too busy looking ahead. In a world of razor-sharp competition, failing to take any risk at all is not an option anymore. E.M. Rogers noticed that an early adopter is very often the reason why a product crosses the chasm. It’s this group that lets other people know what’s new and now. When you adopt technology with the same gusto, it could very well be your company that’s at the helm of efficiency and productivity.

There are countless examples to illustrate this concept with both juggernauts and small businesses alike. In 2011, there were a mere handful of companies who were clamoring to convince businesses that digital marketing was the wave of the future. Today, there are thousands to satisfy the ever-growing demand. If the pandemic taught us nothing else, it was just how much we needed to have technology at our fingertips — regardless of our personal feelings toward it.

Being on the right side of the s-curve of technology doesn’t mean that you have to reserve every new product as soon as it’s announced. Plenty of companies will purchase technology that they later regret, either because it was quickly replaced with something much better or because it was never a good fit for the employees of their business.

These questions can help you decide whether it’s time to adopt new technology. As you answer the questions in detail, remember that early adopter companies are more likely to be as flexible and adaptable. These companies are able to meet people’s needs as they arise, rather than waiting until they’re forced to do it. You also have more control to experiment with the technology, considering you’ll be the first (or at least one of the first) to try it.

If you do choose to adopt technology in its first iterations, you can also use that as a marketing tool. For instance, you might write several blogs about your experience with it or case studies about how it’s specifically helped your customers. You’re the thought leader, the one who pushes the boundaries to provide more in every sense of the word. Finally, you’re more likely to get better support from the provider company. In the beginning stages, the developers and sales team sweeten the deals for their first few customers, something they’re unlikely to do later down the road.

Of course, this is not to say that every adoption will be a smart strategy. For instance, if your team is likely to be resentful or even hostile when they have to learn a new program, you need to be very careful about what you introduce to them. If you’re hearing a lot of chatter about how one technology is likely to be outshone by another, you’ll want to weigh the relative pros and cons of each version before determining the right move.

Is Your Company an Early Adopter?

You might already have an idea of where your company is based on the adopter categories. Early majority adopters are primarily following the lead of early adopters, while laggards are at the tail end of the cycle. If new products come out and the first thing that the company does is dismiss them entirely, this is likely a sign of a late majority company.

Every business has its own obstacles to technology adoption. For some, it’s purely financial. A CTO or CEO might enthuse over the latest advancements in their industry, but have no way to allocate the funds for it. A CTO might have great instincts for new software but ultimately be shot down when they ask for it.

Yet, as valid as these barriers are, they aren’t always worthwhile reasons to ignore technology. Being caught behind the curve isn’t just a quirk for a company, it can be a direct line to shutting down entirely. Just ask yourself: if you were still using typewriters today, would you be able to hold your own against a business with computers? This is an extreme example, but it’s a stark reminder that companies need to be constantly assessing what they have and weighing it against what they need.

To that end, if you want to become an early adopter company, you would have to at least be aware of what’s out there and how it’s progressing. There’s more information available than ever before, and you can harness it for your benefit. Instead of sifting through endless web pages of marketing spiel, look for articles and reviews that thoroughly review both the advantages and faults of any given technology. In addition, a managed service provider can guide a company and formulate strategies to ensure that you are using the right technology for a competitive advantage.

Once you start compiling the information, you’ll start to see a general overview of what’s available and how it might apply to you. Keep in mind that your knowledge will never be complete — there will always be some new technology out there that you haven’t heard of. Just aim to keep up at the early stages of the game, rather than coming in after the dust has settled.

The Competitive Advantage of Being an Early Adopter in Technology

Whether it’s capitalizing on a social media platform (before it becomes too crowded) or merely upgrading the servers, technological innovation gives you an edge over your direct competitors. You don’t have to boast to your customers that you’ve spent more on flashier capabilities, but it can be used to entice them to check out your products or services.

But as with all decisions, you have to weigh the opportunity costs of failing to take the chance. The longer you hesitate, the more likely it is that your competitors will take that opportunity and run with it. By the time you do make the switch, you’ll be struggling to catch up to a technology that everyone else has become well familiar with.

Early adopters often want to be seen as leaders, but many are just making smart decisions based on pure economics. No matter how you look at it, having more functionality at your company is likely to translate to higher profits. The core of what your company is today and what it can look like tomorrow correlates to where you fall in the technology adoption curve.